It finally happened. I got my first Aeonic weapon. Specifically this:

Look at them stats! TP Bonus +500 means that whenever I do a weaponskill, it fires of as if I have 500 more points in my limit meter than I have. Store TP +10 (which is a percentage) means I get to use those limit breaks that much faster. However, the best thing? This.

Needless to say, I’m going to have some fun with this dagger and I’m happy to main hand that, but now we run into a little snag here. First, let’s talk about the knives I had before I got this new, shiny one.

First we have a Taming Sari from Sinister Reign.

The stats on this one are pretty nice as a base, but there’s also a few augments that come with these daggers and they are usually a random value for a number of stats just for that knife.

The other dagger I have is a Sandung:

The main things here are the weaponskill damage bonus of 5% more damage and the Treasure Hunter +1 value. The treasure hunter trait on a job means that you’re more likely to get rare things when you kill monsters. Thing here is that I have couple of gear pieces that give me +6 total. Very specifically: 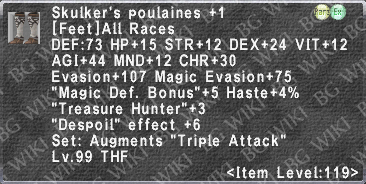 However, that Sandung? I upgraded it a bit before I got that Aeneas. Augments like:

Like… 50 Accuracy, tho. I’m loathe to part with that and even moreso the Critical Hit Rate since the Taming Sari has none of that at all. It’s hard to decide, but for now, I’m opting to keep that Sandung in my offhand until I can decide on what do to with my Taming Sari and the rest of my gear so I can get these baller DPS that THF should have.

What do you mean “baller DPS” from THF?

Well, where most classes have major spike damage, THF has the added perk of doing a bunch of critical damage, which means that their overall damage is high in addition to spike damage from things like weaponskills.

TL;DR: THF is lit and I have a baller knife to match and that means I need to rework all of my gearsets now.

As for what’s next from that Aeonic list, here’s what I see on the horizon: a Corsair (COR) gun. Specifically this:

Until next read, Space Cowboy.